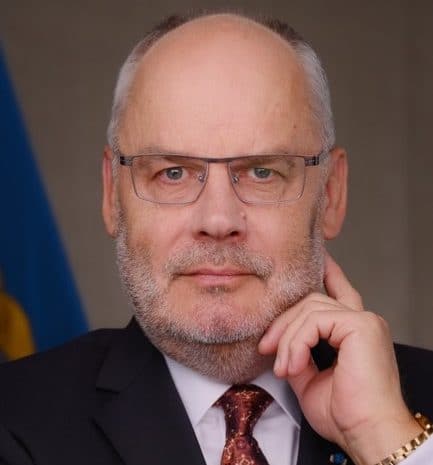 The President of the Republic of Estonia

President Alar Karis was born on 26 March 1958 in Tartu, where he graduated from High School no. 2 (now Miina Härma Gymnasium) in 1976 and from the Estonian Agricultural Academy (now the Estonian University of Life Sciences) as a veterinarian in 1981. He then worked at the Estonian Research Institute of Animal Husbandry and Veterinary Science and later at the Estonian Biocentre of the Academy of Sciences. He earned a Master of Science degree in parasitology in 1987. In the intervening years, his research has focussed on molecular genetics and developmental biology. He has worked at universities in Germany, the United Kingdom and the Netherlands, and joined the University of Tartu as a professor in 1999. His research has been among the most widely cited internationally of any Estonian scientist of his generation. President Karis served as the rector of the Estonian University of Life Sciences from 2003-2007 and of the University of Tartu from 2007-2012. He has led the work of Universities Estonia (the national council of university rectors) a number of times. President Karis served as the Auditor-General of the Republic of Estonia from 2013-2018 and as the head of the EUROSAI Working Group on Environmental Auditing (EUROSAI WGEA) from 2014-2018. President Karis was the director of the Estonian National Museum from 2018-2021. President Karis has previously been a member of the Academic Council and Academic Advisory Board of the President of the Republic and of the Research and Development Council; a member of the supervisory boards of the Estonian Fund for Nature, the European University Association, the International Council of Archives, the International Council of Museums, the museums of the University of Tartu and the Estonian Literary Museum; a member of the advisory board to the Entrepreneurship & Living Environment Development Division of Enterprise Estonia; and the chairman of the supervisory boards of the Estonian Development Fund and (from 2020-2021) the Estonian University of Life Sciences. He has also been a member of the World Cultural Council since 2011.

All Sessions by Alar Karis